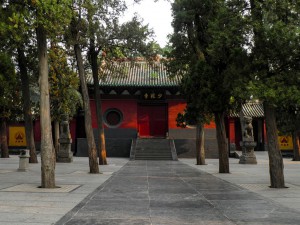 Shaolin Kung Fu has a long history dating back over 1500 years, producing the largest amount of masters and students in martial arts history. Not only is it a first-rate martial art (meaning it can be effectively used for fighting), but it also contributes to excellent health and is a method of spiritual cultivation. With so many versions of Shaolin Kung Fu it is sometimes difficult to know what is ‘Shaolin Kung Fu’.

Rather than describe the different styles it is easier to put Shaolin Kung Fu into four categories:

It would be fair to say that the above classification is for convenience only and there is often overlapping.

It is also reasonable to accept that Kung Fu is actually a martial art. So it is debatable whether the third and the fourth categories can be called Kung Fu. Although practitioners of the third category can fight but they use techniques of other martial arts for their fighting and not those of genuine Kung Fu. This is a great pity. Why many Kung Fu practitioners are unable to use their Kung Fu for fighting will be discussed in another article.

Most of the Shaolin Kung Fu practiced today belongs to the third and the fourth categories. It is admittedly often very beautiful to watch, commonly has genuine forms contained in it and is very entertaining and enjoyable. However it is not high or middle level Kung Fu.

If you are looking to train in Kung Fu it is worthwhile you considering why it is you want to train. What are your aims?

There are of course many reasons why people join a martial arts club. It might be because they want to:

I must admit that when searching for genuine Kung Fu it wasn’t because I was looking to cultivate my spirit. I just felt that there was something missing from the martial arts I was practicing at that time and thought Shaolin Kung Fu had the answers. Much to my delight not only did it have the answers I was looking for but it also had the answers to things I hadn’t even thought of or realized I needed.

So, before you spend years practicing an art without either knowing why or what the scope of the art has, take a moment to ask and investigate. Now that I am on the teaching end of the arts I realise how lucky we are to have access to high level Shaolin Kung Fu.

If you want to achieve all that the Shaolin arts have to offer then a good place to start is with a high level art. Whilst I am grateful for what I learnt before Shaolin Kung Fu I realize that I could have spent many more years attaining a high level in a lower level art. I would have missed out on training energy, clarity of mind and spiritual cultivation, with the benefit of being able to apply my art to everyday life…not just fighting.

Another important point is to appreciate the difference between learning and practicing. Learning involves knowing more and more material, often in theory. Practicing involves going over and over again material that you know, usually in action. In the past, before you even got a chance to learn Shaolin Kung Fu you needed to prove you were capable of repetitive actions. So you might follow the master about for a year or so sweeping his floors and doing his chores. I’ve thought about bringing this tradition back, but so far I’ve had no takers!

Of course, the foundation training of Shaolin Kung Fu is extremely important in terms of your continued development. We spend a lot of time in stances. This is often the part of training Shaolin Kung Fu that tests if the student is ready or able to learn a high level art. It not only builds strong stances, but also internal force and clarity of mind. Both energy and mind are required for spiritual cultivation.