The legend of Nian, from the book: The Guardian Lions - A story of finding courage and wisdom. 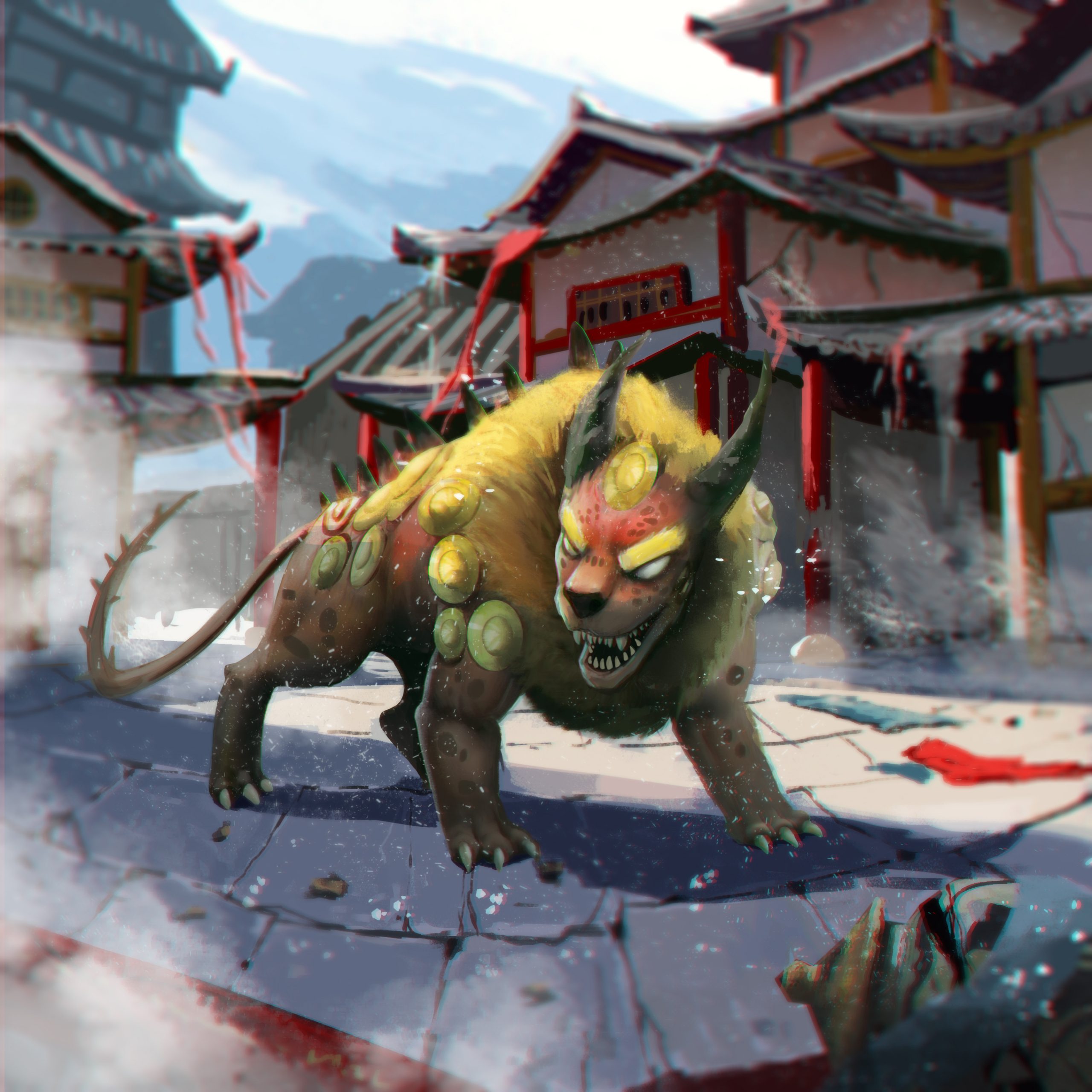 At the Beginning - The Guardian Lions

"When all seems lost, look to the heavens."

As Emperor Gaozu slumped to his knees at the side of his two dying lions, his wife, Empress Lü, stood by and watched motionless, her face fixed like a porcelain doll, devoid of any expression. Only a glint in her eyes and a small crease at the corner of her mouth gave away something more sinister.

The Emperor fell into a great depression. A gift from Persia, these lions had brought great happiness to the Emperor, but now they had gone, and a great cloud descended from the skies, over the lands, and reached into the hearts of the people.

The heavenly beings watched over the Emperor to see what would happen next.

The people prayed to the heavens for the Emperor to find his happiness once more, as he was usually a just, generous and fair ruler. But in his pain, he was cruel and unwilling.

However, on each Chinese New Year, a monster called Nian would ascend from the sea where he hid and attacked the villages. This was a greedy monster who just loved causing havoc. Most of all, he loved eating children. Being greedy, though, he would eat anything in his path. So at this time of year, everyone would try to hide away, for fear of being eaten, except for a few farmers who tried to protect their precious crops.

The farmers did their best to drive the monster away, but it was no use. Unfortunately, Nian was so powerful and greedy that he ate anything in his way, including some of the farmers. Once Nian finished with the farmers, he wandered through the streets, sniffing at doorways, market stalls and carts, looking for something else to eat.

The Emperor had made a promise to the heavens to protect his people from all harm, so he sent his best warriors, the Guardian Lions, to reason with the monster.

When the Guardian Lions arrived at the field, they were met by a very fierce, very angry and very greedy monster, Nian. Nian roared at them; he wasn't interested in talking - he just wanted to eat. His roar was so loud that it blew the roofs off the farmers' homes. The Guardian Lions were not afraid and did not move out of the way.

Nian spat out fire at the lions. The Guardian Lions took one step back and moved their paws in circles in front of their bodies, blowing the flames away. Nian was getting angry! He charged at the Guardian Lions, but they simply stepped to the side, out of the way. The monster tripped over and ate dirt.

Nian got up, spitting out dirt. He spun around with his spiky tail at the Guardian Lions. This time they jumped into the air, one landing just in front of him and the other on Nian's back, pinning back his ears to make sure he could hear.

"Why are you fighting with us, monster? Your fight is not with us. You are hungry, but you are also greedy, and your greed has made you blind to what you have done. Every year you come to the villages and try to frighten everyone. You eat children and anything in your path. But instead of finding food, you have destroyed the crops the farmers have worked so hard to grow. Now no one has anything to eat, including you. Have you not heard of the mountain of abundance beyond the three seas? There you will find all the food you will ever need. Go now, and the heavens will help you find your way."

Nian looked around. Seeing what he had done, he felt ashamed. He knew he was no match for the Guardian Lions, for they possessed great power. It was pointless fighting with them, and they meant him no harm. He was hungry and sorry. The villagers came out of their homes, banging pots and pans in celebration and waving red ribbons. Nian could not stand the noise and hated the colour red. With that he bowed to the Guardian Lions and the people, then ran away, never to return. Well, at least not back to the villages.

In honour of the Emperor for sending his two best warriors, the people of the lands held celebrations. Making masks and costumes of the lions, they danced to the beat of drums, hung red lanterns and lit firecrackers to scare away the evil spirits and monsters.

Of course, the Emperor's two Guardian Lions were very skilled - so skilled that they had only needed to use courage and wisdom to help Nian, without causing him unnecessary harm.

While the Guardian Lions were more powerful in kung fu abilities than the Emperor, they also knew their place and considered themselves the Emperor's servants sent from the heavens to protect and serve. Upon arriving at his court, they bowed and waited for permission to speak.

"What news do you bring me?" the Emperor asked.

"It is not good news, Your Imperial Majesty," said one of the lions. "We have fought with and won over the hearts and minds of a thousand monsters and creatures. Yet still, more come."

"I see," the Emperor said. "This is not good. I had hoped that by now the monsters and creatures would know it was useless trying to fight against us."

The Emperor smashed his fists down on the table. "This is ridiculous; who would dare challenge me with you two at my side?"

The Emperor stroked his long beard to consider what the Guardian Lions had told him.

"This is a conundrum. What is your solution?" asked the Emperor.

"What if the lions fell into the hands of our enemies and are turned against your Emperor or the people we protect?"

Agreeing with this proposal, the Emperor handed the Guardian Lions the royal seal to show the heavens to proceed with the plan. From then on, all the villages and lands had real heavenly lions to protect and bring joy, not just ones they'd made for the celebrations from masks and costumes.

The Emperor Gaozu of Han enjoyed a protected reign from his Guardian Lions for a number of years. But then it was time for him to die and pass on his legacy to his son, Liu Ying, who would become Emperor Hui.

After the death of his younger half-brother Ruyi, Emperor Hui became concerned for his own safety. In fear of his successors using the Guardian Lions for wrongdoing, he had them turned to stone. But not before their spirit and power were hidden in waiting, for the descendants of the Guardian Lions to be ready to receive and harness the power.

For nearly 2000 years, the power of the Guardian Lions was passed down from Guardian to Guardian, to protect the people of the lands and keep the peace. Now a fortuneteller has given knowledge of the next passing of power to a warlord – a warlord who wants to steal this power and become supreme ruler under the heavens.